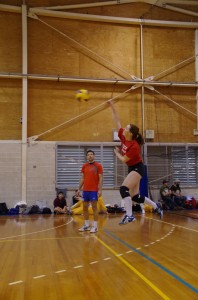 Saturday 20th September saw a very successful hosting of the Freezone Annual Spring Tournament, with some 30 teams and over 200 participants converging on the Olympic Sports Halls for a FULL day of volleyball action.  With teams from Sydney, Melbourne, Brisbane and Canberra it was a truly National Affair with 5 divisions of play, prizes for best dressed team and competitive mixed and men’s divisons seeing plenty of action and talent.

It was a wonderful tournament to be a part of primarily because of the spirit in which the games were played.  Watching

everyone enjoy themselves on court and get behind their teams and clubs, having a laugh and a giggle whilst pushing themselves on court to achieve and play well.  The lead up to the tournament saw a hoped for Women’s Division have to be sacrificed in place of a plethora of Mixed entries.  Next year we are hoping to have a complete women’s Division in place but we were very happy to have 2 full teams of ladies (not all of them single) competing alongside 2 mixed teams.  The mens division held its own with 8 Teams in the B Grade and 6 in the A grade.  A really great mix of play and talent was shown throughout the day with some great finals at 5:30pm that afternoon.

Freezone Volleyball wouldn’t be able to host its tournaments without the very generous support of the local GLBTI and business community.  So we thank our primary sponsor ACON who once again, have thrown their weight behind the club this year and their ENDING HIV message was out on the day.  We also welcomed our new Tournament Sponsor TEAMM8 on board, who after supporting teams at both OUTGames in Darwin and Gay Games in Cleveland, have rallied support officially as tournament sponsor for the next 12 months.*  We are very grateful for their support and commitment to helping us achieve great play and fun during our 2 main tournaments throughout the year.

As well as some amazing sport, there was some pretty impressive costume co-ordination going on. It was great to see more than a handful of teams, out with some ‘non FIVB’ level uniforms and accoutrèment, adding to the fun spirit of the game.  We had everything from Kangaroo Onesies, to Tiger ears (and a very suspicious tail Joe Sleiman), Pyjama Pirates and Army Combat instructors.   But it was the BANG BANG crew in their school gear that took out the Costume Prize this tournament.

Another highlight had to be  THE FOOD.  Jo Wongpitax excelled himself this time with an amazing array of Thai Dishes created for the occasion.  The smell alone at lunch was something that everyone was salivating for and we are incredibly grateful to Jo for his dedication in providing and supplying such an amazing lunch.  Thanks also to Lunchbox in the Park who once again provided wonderfully fresh sandwiches.

Tournaments don’t happen on their own and it must be said that there are many individuals to thank.  Particularly those from our own volleyball Community.  I would really like to thank Chris Proffitt for his assistance on creating the draw and fitting so many teams in, even when we were faced with more teams wanting to join in.  Joe Sleiman for his enthusiasm in recruiting teams and players and for bringing so many enthusiastic players to the tournament.  Puna Mariri for her ongoing support in printing and bringing teams across all levels to our tournaments.  Without the support of our local clubs, including the Qantas Crew, Kaiata, Manly Warringah, Baulkham Hills, ASIMS, East Sydney Volleyball, UTS, UNSW and VOSTOK, our tournament wouldn’t be the level that it is.  And it’s great to feel that we have the support and respect of our fellow NSW clubs to help make our tournaments the best they can be.

I would particularly like to thank our interstate teams from Brisbane and Canberra, and our wonderful ‘sister club’ the

Melbourne Spikers for making the journey to Sydney.  You help to make our event a National Event and it is so wonderful to have you on board and participating.   We hope to have you more often to make sure we keep our GLBTI community solid and supportive.

I would personally like to thank the new members of our committee for stepping up and rallying to help pull off a great event.  Having only been elected 3 weeks earlier it was a small baptism of fire and it was great to have so many hands to help.  Mark Bennett, Offie Chumsuwan, Andrew Wilmot, Khit Jartnoi, Jo Wongpitax and Yumi Pham-Vu.  Freezone is thankful.  This also includes all those people from within the club who stood up on the day, got there early and helped with nets, pumping up balls and the Raffle.  It makes the club thrive when everyone stands up and pitches in.

Finally I need to give a huge thank you to our Tournament Director Bob Konakoff, who once again lent his significant experience and direction to our little crew in his own wonderfully relaxed and ‘flamboyant dress sense’ style which somehow sits incredibly well with us.  As well as the wonderful Janita Baldwin, a new face at our tournaments, who really steered the direction and had the Excel Spreadsheet humming with effici

ency.  Without you behind the desk, maintaining the smiling faces, the tournament would have been lost.  We are so grateful.

So we look forward to to Mardi Gras 2015 for our next hosted tournament where we hope to welcome you all back, with bigger, better and brighter Costumes, Food, spirits and volleyball on offer to keep us all entertained and enjoying some court time.
Til then…

GOLD: Sets on the Beach

A Grade:         Nils Langford The Cold Never Bothered Us Anyway