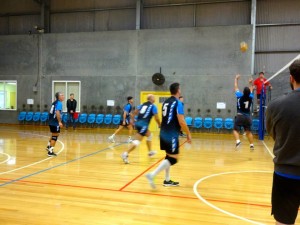 The Manly Cup run by Manly Warringah Volleyball Club was held at Warriewood Indoor Sports Stadium on the 11th/12th April and Freezone was represented in Div1 by the FZ Pistons.

Division 1 and Honours Level were on offer in both Men’s and Women’s grades and there was a healthy collection of 16 teams in the Mens Div 1 pool.  The Pistons pulled together a number of new players from our Wednesday night Training including Jeffrey Montellano in his first competition as a freezoner and even included Oscar Konakoff playing for Freezone!  Our Wednesday night coach had everyone quaking as he worked hard on his serving and spiking to add some ‘muscle’ alongside our huge hitter from Cyprus, Lenos Yiannou.  This gave the team so real depth in the front court and rallied some of our older stalwarts into action.

Having ‘subs’ was something new for the team and it did take some getting used to.  But the Pistons did well on the first day coming out in straight sets victory over USYD and Air Swings.  The Sunday saw our real test with our final pool play off against UNSW.  Owing to the number of entries, a team had to finish on top of the pool to have a chance of advancing to the medal play offs.  The Pistons were up against a very experienced team from UNSW and it was a tight match at 8am!

Pistons took the first set 25/22 in what was possibly a small surprise.  The blocking and defensive work of the Pistons really saw them in good form along with some really strong serving.  The second set saw the the Black and Golds rally and begin to attack more deftly through the middle.  In the end it was a few reception errors and some missed serves that came down to it and UNSW won the set 25/19.  As there was less than 2 min left to play, the match ended in a draw.   Pistons really needed to win the match outright to go through to the medals.  On Point count back it came down to 3 points 47/44 that saw UNSW advance through to the medal round.

The Pistons has one more match against ASIMS which was a combination of Vostok players and some of the familiar boys from Western Sydney.  Pistons were on the back foot from the get go in the first set and really needed to step it up from a 25/14 crushing.  The 2nd set saw a change in tactic and running a few more middle attacks.  It was a much close set but once again our serving let us down in the end as we lost bey 3 points, 25/22 to the ASIMS.  There was some pride restored with a 13/9 victory in the third on the buzzer.

It was great for Pistons to play competitively at that Div 1 level, a level that the team has tried to compete at before and come close.  The great thing was having the coach on court who admitted that the experience was worth it to take the lessons back to our Wednesday night social training and work on elements of the game that we were missing.   But it was a great 2 day tournament and important one for the team to get under its belt as we worked towards gearing up for the State Cups coming up in May.

Kaiata also fielded a team in the Men’s Div 1 pools and did make it through to the finals.  A very tight qualifier for the Gold Medal playoff against Rockdale Legends came down to a ‘golden point’ at the end of time.  Even sets and locked at 11/11 the two teams had gone point for point for much of the match with some exceptional defence from both teams, Seul Gi Lee standing out as the ‘blocking wall’ for Kaiata.  The final point only had one attack with Legends going to their no.3 Outside hitter and winning the point and advancing to the final.  Kaiata re-grouped and managed to take out the Bronze medal later in the day.  Congratulations boys.