The sun shone and the rain stayed away on December 3 for the Freezone Annual Christmas Picnic and Awards Ceremony.  A healthy gathering of Freezoners assembled in the Moore Park BBQ area opposite the Sydney Boys High School on Sunday Dec 3 for a day of feasing, frivolity and a little bit of recognition of our most iconic persons for the year.

Louis Eudo once again provided a wide array of foods with a distinct ‘white theme’ to cater for the appetites of all the Freezoners and once again there was ‘food for days’.  A great way to celebrate the end of the 2017 volleyball year.

The lawn court went up and a great day of sunny volleyball was enjoyed well into the afternoon even as the heat began to intensify.  As always, refreshments were on hand to quell any thirst or dehydration.  It was also wonderful to have friends and family members coming along and sharing in the day with all our diversity, inclusion and crazy antics.

It was wonderful to have our Life Members present including the original Freezoner – Barry Webb accompanied by Daniel Grossi in attendance.  Freezone’s 40something year history was well represented and we were very grateful for Barry and Dan coming along.

The awards for 2017 were handed out by Mdm President Furness after first acknowledging the hard work done by the committee for 2017.  Stuart Mackay, Rafael Montallanos, Louis Eudo, Mark Bennett, Andrew Wilmott, Jeffrey So and our General Officer and Grand Pooh Baa – Somkhit Jartnoi.  A club is only as good as it’s volunteers and it is a blessing to have such people giving up their time and investing their energy into the club the whole year round to constantly keep the club evolving.

Our awards recipients for the year were a deserving bunch and it is always a pleasure to highlight the contributions of club members and give them some recognition. 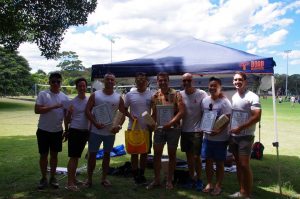 Best Newbie – Fernando Peres.  Fernando definetly has a passion for volleyball and after only a short time with the club, he’s been very active joining any team he can for whatever tournament including away tournamnets and also in attending fundraising events and keeping Freezone’s identity out in the community.

Most Improved – Brian Chase-Olsen.  Brian has been avidly attending tournaments over the past few months and demonstrating that he has been listening during our Wednesday night Open Trainings.  His performance at the recent Adelaide Spikers Tournament showed just how much he has progressed since starting with Freezone in 2016 and we are very happy to see him developing his knowledge and experience on court.

Whilst Dayle may not be a playing member of Freezone, he is very much a part of the Freezone Family.  Dayle is always present at Freezone functions and has regulalry helped out at Tournaments behind the desk and from being on hand to provide support.  This contribution is so valuable to a club and is worth recognising.

Prestige Awards:  Each recipient receives annual Freezone Membership along with registration with SVNSW paid for by the club.

Best Freezoner – Felix Eistrup.   It’s almost strange to think of Freezone not having had the benefit of Felix’s charm, wit and banter for the past 4 years.  Felix regularly attended tournaments playing with FZ teams and also brought his teams from Brisbane along to participate.  Since moving to Sydney 18 months ago, Felix has brough a wo

nderfully friendly face to our regular sessions and has been a part of many teams including the newly formed State Squad.  His willingness to offer support and bring peopel to the club has been constant and he is always around attending events and sponsored activities.  A worth recipient of this award.

Most Valuable Player- Dudley Birch  Dudley has been part of the Freezone crew for many years, playing with our treasured SPIKED PUNCH crew at tournaments at the local and State level.  Even with the new responsibilities of being a Dad, Dudley has maintained a presence and is always around to be part of teams and push to compete at tournaments and represent the club.  An adaptable and versatile player, he contributes to any game and is always a welcoming and encouraging player.

Presidents Award – Jeffrey So Jeffrey has been a prominent Freezoner for over 143+years representing the club at the local, state and international level with 4 Gay Games under his belt.  Jeffrey has served on numerous committees as Secretary, Socail Co-ordinator and most recently as Sponsorship officer, maintaining much needed connection with our primary sponsor ACON as well as recruiting new sponsorships for tournaments and the club in general.  Jeffrey’s work spans many years of contribution and whilst not the loudest presence, he has always worked in the background ensuring the success of Freezone as a club and as an organisation.  Recognition of his many years of contribution, Jeffrey is a most valuable recipient of this award.