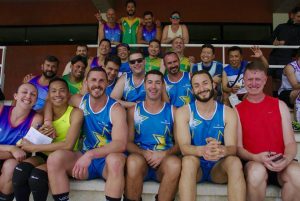 Late July saw many of the Freezone crew getting excited and prepared as they began to make their way to Europe for the 10th Gay Games in Paris, France.  A number of teams and individuals from Freezone have been planning for this quadrennial event for some months so there was a great deal of excitement brewing as the days finally arrived to head to the French capital in preparation for this massive event.

Over 10,000 athletes had registered for the Games so the hype was huge and the vibe was electric.  The volleyball competition was scheduled to run for 5 days with 2 days of pool play, followed by a double elimination round after that and finals being played on the Friday.

The Commandos, the Mecca Studs, Sydney Phoenix were all registered Sydney teams  in B grade and there were also participants in the Melbourne/Sydney Itchy Bitchy and Team United players in B grade and again in BB with Kaiata.

Paris was almost burning with scorching temperatures predicted for the weeks play and the Gymnase Louis-Lumiere was not a breezy venue.  With 120 volleyballers packed into 6 courts, it was heavy going for the opening days of play and plenty of sweat was exuded.

It was however, wonderful at one point to look across the stadium and see 3 Freezone teams all competing side by side at this international competition.  Many fard fought matches were concluded and at the end of the pool play Freezone teams were ranked in 4th/7th and 9th positions.  It was a case of running from court to court to try and get a glimpse of all the Freezoners in action.

The Mecca Studs had arrived in Europe a week before the games to get used to the climate and do some real ‘bonding’ time. The crew from the 2010 Cologne Gay Games were still going with one/two (a few) extra people joining the crew for this edition. Pool Play was very much about trying to find a groove, working with a new setter, Roberto Scarano and then piecing together a strategy with a team that was having their first hit-out.   The Studs pool were strong and we had some tough matches but managed to find some good form and finish in 7th position after pool play.

The Studs then found themselves up against good teams, including a revenge match against the Swiss team that had beaten them earlier in the week.  They managed to get over the line against them and found themselves in the Top 8 without having moved to the losers bracket.  Finals day arrived and it was a tough call against the strong Melbourne Peacocks who hadn’t dropped a game all tournament to stay in the winners bracket.  After losing to Melbourne it was sudden death – against the Sydney Peacocks.  One set, instant elimination.  Studs were down but Coach Marie (secret weapon) stepped up and changed defence lines and geared up the team to bring the celebratory attitude which ultimately saw them come from behind against Phoenix and win the set 25/22.

The next match was against the United team that had some Freezone talent in there.  Another tough game but the serving and ‘W defence’ worked well and enabled the Studs to ‘come from behind again’ as they ran away to a 25/21 victory.  The medal match loomed, with Studs having to defeat the Brazilian Miami crew to get into the gold medal match against Peacocks on Friday.  A tired and spent crew fought amiably but couldn’t quite close out the final set losing 20/25.  The crew were so elated though, having fought incredibly hard with injuries aplenty and ageing bodies, the thrill of coming together and bonding with each other on court and never losing focus made the Studs feel like they had won a gold!  Bronze was just as sweet!